My five year old son Dylan had just started year one & was sick twice at the beginning of term, I took him to the doctor & we put it down to school germs. He would on occasion complain about a backache but it was so sporadic & he seemed so well in himself that I thought he’d maybe pulled a muscle on the climbing frame.

One late October morning I noticed Dylan had a slightly swollen cheek, I took him to the doctor several times as it continued to slowly swell over a matter of weeks. Initially, the locum said it was mumps, then possibly a tooth abscess so we went to the dentist. Then one night we rushed to A & E as he’d woken up crying because his lips were painfully swollen. The maxillofacial specialist came to see him & said he’d had an allergic reaction so prescribed steroids & antihistamines; the swelling went immediately but after a couple of weeks it started to reappear so more steroids & again the swelling disappeared. I went back to my GP & she referred Dylan to the dental hospital.

On 16.12.16 after an X-ray & ultrasound of his head, the consultants told us that they couldn’t say exactly what it was but they were “gravely concerned”. I was oblivious, waiting for some specific explanation when one of them said to me “what is the worst thing you can imagine?”. The penny dropped as did I.

“What is the worst thing you

After immediate admittance to the children’s oncology ward & a five day wait, we were told that Dylan had stage IV b-cell lymphoblastic lymphoma & that they hadn’t seen anyone with this diagnosis in over seventeen years. His first MRI scan lasted two hours & the results were nearly two pages long. Nobody could believe he’d kept going; he was riddled with tumours. We spent Christmas in the hospital as Dylan underwent scans, a biopsy, a bone marrow aspiration & a Hickman line insertion so his chemotherapy could begin.

His treatment plan is similar to that for acute lymphoblastic leukaemia. He had six months of intensive chemotherapy, the side effects were horrendous. At his second MRI the consultants hoped for a 35% reduction in his tumours & miraculously it showed a 90% reduction.

“At his second MRI, the consultants hoped for a 35% reduction in his tumours & miraculously it showed a 90% reduction” 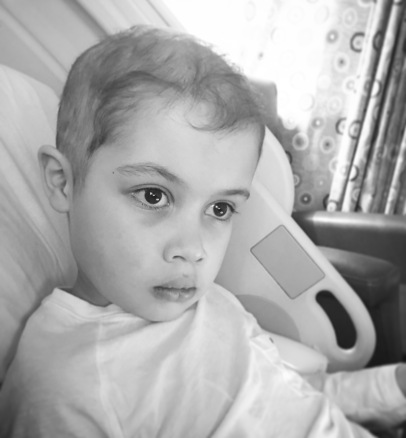 Dylan’s mouth was so full of ulcers that he couldn’t eat or drink.

His maintenance plan started in July 2017 & involves daily 6-MP, weekly oral methotrexate, five days of steroids every month, intravenous vincristine once a month & lumbar punctures with intrathecal methotrexate every twelve weeks, he has weekly blood tests & takes co-trimoxazole every weekend to prevent pneumonia. He’s had more antibiotics than I can remember & is still not strong enough to be at school full time. His treatment ends in April 2020.

As a mother, my heart is broken & my mind has been taken over by unending nauseating uncertainty. Dylan’s strength & resilience has been beyond inspirational. He nearly went right in front of our eyes just after his chemo started but he held on; we lived minute by minute, then hour by hour. Today we live one day at a time.

I’ve been writing my blog, The Little Big C,  about this journey since last November. There is so much pain & fear inside me that writing has become part therapy & part a means to raise awareness.

Childhood cancer is discomforting; seeing children suffer indefinitely is soul destroying; being exposed to the harsh reality of a children’s oncology ward is brutal; babies through to teenagers all fighting cancer. Bald bedridden kids, pale, weak & isolated; zombie-like parents, grey with worry awaiting their children’s fate. When one loses their fight it touches everyone deeply; when one relapses our hearts break all over again. Of course, there are success stories but most of these children will have serious lifelong side effects both physically & psychologically.

“Being exposed to the harsh reality of a children’s oncology ward is brutal; babies through to teenagers all fighting cancer”

I am so humbled by what I now know about cancer; childhood or otherwise. Awareness is key to helping fund research, gaining support & moreover allowing those suffering & their carers to feel less isolated & more understood.

Leave a Reply to Nip it in the bud Cancel reply

There was an error retrieving images from Instagram. An attempt will be remade in a few minutes.

How to tie a head scarf two ways

10 Tips for getting through Chemo